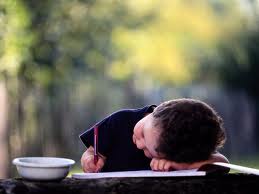 When I first fancied myself as a writer - oh, way back in middle school, or thereabouts - I did what most beginning writers do: I populated my stories with my friends. I was rather insistent on this point, even if I had the subtlety to give them a different name (which I rarely did). It was a nice enough idea at the time and, I guess, in itself a necessary transition point. On some level, every artist must continually wrestle with what it truly means to draw from life and infuse it into your creation, whether it be a painting, sculpture, pottery, poetry, music or literature. How do you create something that is not only interesting, but relevant and inspiring?

You draw from life - or so they say; and it's true, to a point. But only to a point.

The world is bigger than the part you've seen. Never forget this. It doesn't matter if you're a world traveler or a hobbit who's never been outside of the Shire - none of us have seen more than a corner, a mere sliver of the world. You have not seen all there is to see, known all there is to know, and you certainly have not met all the myriad kinds of people in this world. Neither have I. Even current access to movies and television cannot grant us the wealth of possibilities that your imagination could supply. Yes, reality is a beginning point - but then what?

The people you know might not react the way your characters need to react in your tale. I know many brave, even courageous people in my life; but faced with the kind of things I put my characters through, most would probably run away screaming. While I certainly look to specific people to get an idea of how someone might act in a given set of circumstances, it's a bit skewed because neither I nor the person in question really know what they'd do when the crisis happens. You think you know, but it's only a guess, at best. But in your tale you've got to know - you're the author! Part of that author-ly responsibility means knowing when to twist your characters arms, and make them act a certain way - so long as it's within the boundaries of who they are. As the author, it's up to you to determine those boundaries, as well as the response.

Putting real people in your story is not only a good way to get sued, but to get fish-slapped by a potential agent/publisher. I saw this in an article online a couple weeks ago, where the agent made the point that if you put your sweet five year old daughter into the story, what are you going to do when the publisher thinks the child ought to die at the end? Or that the best friend (that you love so dearly) is too saccharine, or a downright drudge? Then you get double the emotional suckerpunch for the price of one character. Ouch.
Oh - and that whole getting sued thing? For exploitation, defamation of character, etc?
Yeah. That should be common sense by now. Goes without saying.


Want to know how TO craft dynamic fictional characters? Tune in next week for Part II.

(Yes, I know this is evil of me - but it is only three days into NaNoWriMo.
I need all the buffer space I can get with the updates!)