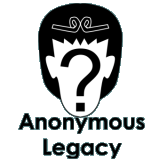 Why would any writer name her blog Anonymous Legacy?

The Origin: During the five years I was on Facebook, my "about me" line was one sentence long, and it never changed: My dream is to die anonymous and leave behind a legacy of students that change the world. That line never changed because my love for teaching has never changed, and that dream has never changed. I know that long after I am gone, my legacy will live on in my students, and the lives they touch - and so on, beyond reach, itself a moving landscape without boundaries.

Teaching is at the heart of what I do; but my writing is tightly bound up in that first love. I don't teach because I write; but I do write because I teach.

The Journey: Now that I have embarked upon the quest to publish my current manuscript, the name Anonymous Legacy has taken on additional meanings. In one sense, it is anonymous because - as of right now - I am still unpublished and therefore anonymous to the rest of the world. When I do win through to a publishing contract, my legacy in print will have begun, but it still will have anonymous roots. All stories begin in anonymity. Every author must win their spurs in the world of story-breathers, and I am no different.

The Manuscript: Anonymous Legacy also has pertinent reference to nearly all my manuscripts, past and present. Originally I worked on this idea in my science fiction project Castle 8, a survival story of three brothers in a post-dystopian society that is breaking down, beyond even the attempts of the ruling class to recover.

Over time, however, this same idea cascaded forward into my other narratives, including my current project, Memento Mori, the story of a soul-harvesting businessman for death whose involvement in a botched suicide plants him at the center of a dangerous controversy over the laws of life and death.

It is a terrible thing to not know who you are. In that sense, an Anonymous Legacy is the most precious thing of all - and the most difficult to reclaim. Whether Welsan (the soul-reaper) or the Swackhammers (the three brothers) will be first to show this to a larger audience remains to be seen. But rest assured, the golden thread of leaving a lasting legacy will remain at the heart of what I write, and how.

And so the legacy continues...