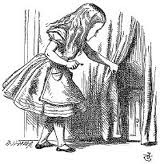 
Alice is my hero - both the real Alice, and the perpetually blonde, blue-frocked gal with comfits in her apron pockets, immortalized by Lewis Carroll. (The real Alice, incidentally, had short, brown curly hair - the exact opposite of Tenniel's imaginings of her.) There are many reasons why Alice endures as one of the most iconic heroines in children's literature; but her greatest virtue (I think) is that she can believe the impossible, and does it routinely - every day before breakfast.

Today I commence my second annual NaNoWriMo marathon. In so doing I have, in one stroke, committed to believing three impossible things:

1. I believe I will find time to type a minimum of 1924 words on a non-work-related project on any given day. Usually the word minimum is 1667/day, but I have a four day road trip planned that will put me beyond reach of a computer, taking my NaNo days down to 26. So - 1924 words per day it is. With three jobs, it logistically seems impossible. But I also know where to steal from Peter to pay Paul (metaphorically speaking), so I stand convinced I can get it done.

2. I believe I can keep up that 1924 minimum every day for the entire month of November. An enthusiastic beginning is inevitable, but all marathons require stamina and endurance. I can steal from Peter to pay Paul for a few days, maybe a week or so; but can I keep it up all month? Well, I did it last year - and I had FIVE jobs then. So, what's my excuse? You say: "None." (That's what I thought.)

3. I believe I have a tale worth the trouble of writing down. In some ways, this is the biggest leap of faith. The word count is one thing; making time for it is another. But to believe at the outset that I have a coherent, believable tale that would interest others, is the biggest impossibility of all. It's also the virtue for which no one - in NaNo or out of it - can reward me at the end of this month. When NaNo is over, the hard work will have only just started. There will be layers of faith and frustration to push through before my manuscript is ready for beta readers, let alone professional eyes.

But that's why it's a leap of faith, right? An enormous leap. A leap so huge that even to believe in it is considered impossible.

That's why we should do as Alice, and believe in our impossible goals before breakfast every single day. Because even believing in your dreams does, at rock bottom, require practice.


What impossible things are you believing in today?