Here is another episode in Welsan's Story, courtesy of another Write For Ten prompt.
Today's prompt is the word: ring.

Since Donna posted all the various definitions of "ring" I was able to discover that a certain kind of ring,
or "annulus", is a very specific term generally used in mathematics. Here I put my own spin on it,
thereby deepeningWelsan's world, especially those who comprise the Charnel Guild. (THANKS, Donna!)

This episode follows on from Episode 11. 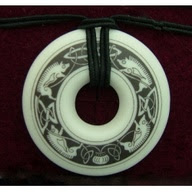 photo source
A Celtic Annulus Necklace, much like the one I envision Welsan wearing.
But in pewter. And with very different things carved on it.

The door swung open part way, spilling firelight into the filthy dead-end of an alley and making Jada squint. Welsan moved as if to enter, but the guard stopped him.
“Contracts first,” he said.
Welsan hesitated, and his voice grew instantly cold.
“I do not carry iron,” he said.
“Prove it,” said the guard. “Let’s see the contracts.”
Jada looked from Welsan to the guard and back again, baffled. Surely he doesn’t mean the death-contracts? she wondered; but before she could form a question Welsan had fished a hand down his collar and pulled out two black cords, one slightly longer than the other, each one cinched through a circle with a hole at its center. The smaller one was made of glass, and glinted like a black star in the spilled firelight; but the larger one shone like silver, and made the guard step back in surprise.
“Any reaper of the Crown is a friend here,” he said.
“Protected by the Crown,” Welsan corrected. He waved Jada forward. “We’re not at war right now.”
“One can always hope,” grinned the guard, and stepped aside.
Together they slipped into the room – a wide space surprisingly well-lit, with a fireplace roaring at each end and chairs and tables set throughout the open spaces. Welsan took Jada directly to a corner table where he could see the whole room at a glance and sent the guard off at once – for drinks, and also for Gallows. Only a few other people sat about the room, each minding his own pint or conversation, save for a pinch-faced man in another corner who seemed occupied with a game of solitaire.
“Let me see that,” Jada said as soon as she was seated. She pointed at the gleaming discs, still in full display over Welsan’s shirtfront.
Welsan put a hand around the glass disc, but Jada stopped him with a sharp: “No – not that one. That’s the contract to oversee my suicide, I know. I signed the back myself.”
“How brazen of you.” Welsan’s eyes did not leave her face as his hand moved to the other disc and lifted it from around his neck. He put it on the table and slid it across to her.
Jada took the disc in her hand, the black cord trailing across the heavily scarred wooden table. “You are under contract to the Emperor,” she said in a low whisper. A thrill ran through her – and instantly tried to squelch it. Can’t show excitement, she thought. Death is delayed for me – not cancelled.
“It’s called an annulus,” said Welsan. How he always insisted on precision of words! “But since the cease-fire, it’s serves only as proof of protection.”
“And if war broke out again?”
“Then I’d be on the front lines, with a glass-man at my back.”
“Like Gallows?”
“It would be Gallows, if I had my way.”