Here is another episode in Welsan's Story, courtesy of another Write For Ten prompt.
Today's prompt is: a deserted alleyway.

This is a great prompt for me, as it allowed me to jump forward and play with what happens
to Welsan and the shadow-breather (named Jada) once they escape the scene of the disrupted death-leaving.

This episode begins a whole new scene all by itself. More on the wrecked death-leaving later!
(Yes, I know. I'm being an evil author right now, mwahahaha.) :-) 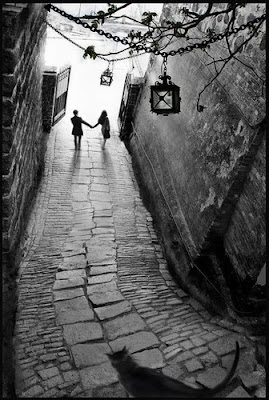 
Welsan turned off the main boulevard and down a side street, hand still clenched tightly around Jada’s wrist. She wasn’t resisting his leadership as much, now that they were so deep in the city; but he sensed her strong resentment. Biding her time. Like me.


He couldn’t help it that her death had been interrupted. He had no more anticipated the arrival of soldiers any more than she had, let alone a Tribunal snitch.
Einhard will pay out for that one, Welsan seethed as he dragged Jada down another street – this one more narrow, the balconies of the opposite apartments close enough to jump, one to the other. They passed a gaggle of children playing with sticks and hoops, all just as dirty as everything else in this city.
“All ashes and dust,” Jada muttered, and immediately gave a reflexive cough. The air was choked with it, but Welsan had learned to keep his mouth closed and breathe through his nose to thwart the worst of it.
“We’re close to the coal-fields here,” he breathed out, and then shut his mouth again. Cauldron wasn’t the city he’d typically choose for a hide-out either – he felt more at ease in other places. But with so many people after their blood, their choices were limited.
Not far beyond the hoop-and-stick game the alleyway pinched off severely. Shops and cart vendors abruptly ceased as they passed into the half-lit twilight of the cobbled way beyond. No balconies or windows overlooked their progress, and no one else passed by them, going in or out. Overhead sagged a chalky stripe of sky, shot through with puffs of coal-black smoke.
Jada pulled back as the walls closed in, dragging against Welsan’s grip. “What is this place?” she hissed. “Where are we going?”
“To see an old friend.” Welsan gave Jada’s wrist another tug and she stumbled forward, reluctantly. “A glass-man, if you want to know.”
“A glass-man?” Jada echoed. “The Tribunal and the Vassal of Ochre are out for my capture, and you’re trying to buy more soul-glasses?”
“Not exactly,” growled Welsan through clenched teeth. “And you’re not the only marked soul here - they’re after me too. Gallow’s Block is the perfect place for both of us to hide. Besides,” he added, with an eye cocked to Jada’s Brigade uniform, “you need new clothes. You stick out like a poppy in those death-rags, even in this black hole of a city.”


Intrigued? If you liked this episode of Welsan's odyssey, you may visit his page to read more.

Questions? Comments? Let me know in the comments below!
And as always - thanks for reading!!
Posted by Angela at 11:00 PM