Here is another episode in Welsan's Story, courtesy of another Write For Ten prompt.
Today's prompt is the word: obscure.

This episode follows on from episode 10, and - just for fun - is told from Jada's point of view. 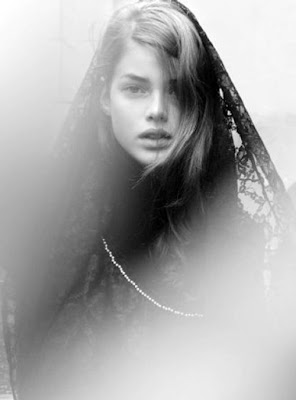 photo source
Perfect rendering of my idea for Jada...

Before long the alleyway became so dark that Welsan’s grip was all Jada had to orient her to her surroundings. The air was stale and sour, and the gray stripe of sky overhead illuminated almost nothing ahead. Jada was on the verge of panicking, being fairly certain Welsan was about to lead her into one of the myriad tunnels that catacombed the belly of the city. She had never been through the labyrinthine sewers of Cauldron, of course; but she had heard harrowing stories.
Her head was abuzz with horrible images when Welsan stopped so abruptly she ran into him.
Peering around him, she saw they had come to a barricade of massive wooden pillars. Their feet were anchored to a massive beam that ran the width of the alleyway, and was in turn braced against a stone protrusion that jutted from the grimy walls on either side. Each vertical post stretched up to a level just above the stone walls, where they supported the overhanging edge of a wooden platform that overshadowed the alley’s end.
“City gallows,” said Welsan, before Jada could ask. “Posts brace it so the gendarmes can keep the stage back from the pavement, with plenty of barricades to prevent crowds from interfering with the….ah….entertainment.”
Jada bristled. “Is that all death is to you – entertainment?”
“Never,” said Welsan. “Death is many things to me, but it is never entertaining.”
“But it is a business.”
“For me? Absolutely.”
Welsan went forward again, pulling Jada along as he went.
“Wait – Gallow’s Block?” Welsan’s earlier words suddenly seemed to make sense. “We’re climbing up those? To the gallows?”
“Not in the middle of an execution.” Jada almost thought she caught the hint of a smile in his voice. In the next moment, Welsan had caught her around the waist, and pushed her over the horizontal bracing-post. She narrowly managed to land on her feet in the absolute darkness beyond. Beyond the wall, she heard the dull roar of a crowd milling about, waiting for the next display of justice.
“If we’re not here for the Gallows, then what…”
“Not the Gallows. Gallows. The man, not the place.” Welsan’s voice drifted out to her from a new direction, and Jada realized she had lost complete track of him in the shadows beneath the stage.
There was a knock in the dark. On wood. Hollow wood.
A door, Jada realized.
A rectangle of light appeared suddenly before them, as a small hatch slid aside. Jada blinked against the sudden flicker of firelight that backlit a long rectangular head.
“Password.”
“Broken glass,” said Welsan.
“Broken glass?” repeated the shadowy face. “Haven’t had one of you lot in almost a year.”
“Even better. Tell Gallows that the runes are here to sing for him, plus one.”

Questions? Comments? Let me know in the comments below!
And as always - thanks for reading!!
Posted by Angela at 9:58 PM