Welsan 13: The Gloves Come Off

Here is another episode in Welsan's Story, courtesy of another Write For Ten prompt.
Today's prompt is the word: vulnerable.

To properly employ this word for Welsan's tale, I was driven back to the scene of the
"Ritual Suicide Gone Amuck." This episode follows on from episode 9, and
positions Welsan's and Jada's unlikely alliance as they prepare to flee
those who want Jada's soul for purposes of their own. 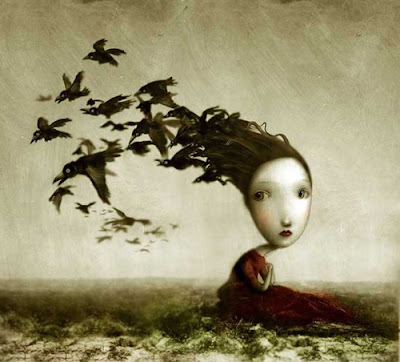 photo source
more of a figurative representation of what happens in this episode...

Welsan watched as a torrent of ochre-uniformed soldiers poured through the door, some trampling The Donna in their effort to get inside. None heeded the fragile body that crumpled like a ragdoll beneath their shining black boots. Only one or two even looked down to see her. None stepped aside.
The old church exploded into chaos. A broad-chested captain barked out orders while Einhard – poor, self-important Einhard – surged into their midst, shouting counter-orders and threats, most pertaining to the Tribunal, and possibly the Emperor.
All the words jumbled together in Welsan’s mind. For a moment he was back on the battlefield of Lindentree, and the clamor of war, the angry and the dying screaming together in one unending aria of death.
Death. They were all here to stop the shadow-breather from her ritual suicide while he, Welsan, was there to help it along. What he was under contract to oversee, both the Tribunal and the militia of Ochre were here to prevent.
Welsan looked over his shoulder at the shadow-breather, now very awake and in the present moment, watching with horror as soldiers surrounded her parents.
“Wait!” she shrieked, and stood up. The sword on her knees clattered to the floor.
You won’t die today, thought Welsan, Not in suicide, anyway...
In that moment his mind was made up. They had to get out – both of them – but they were vulnerable, exposed, in a broad blunted end of the church. Every access door bristled with yellow-jacketed soldiers, swords at the ready. For the moment, none of them had moved any farther into the church – they all seemed to be waiting on the captain, who was in the throes of a heated argument with Einhard.
Before she could move any closer to her family, Welsan reached out and snatched the shadow-breather by the wrist.
“Take off your gloves,” he hissed.
The black eyes flashed to his defiantly.
“Not you too,” she said.
“Just remove them,” said Welsan. “Your family is dead unless we can get you out of here.”
The girl scanned all the entrances, taking in the situation in one rapid turn of her head.
“But how…?”
In answer, Welsan reached up her arms and stripped away first one glove, then the other. Sure enough, she had been in a graveyard lately. All her exposed flesh, from her fingertips to just below the elbows, were scribbled in black stains.
A shout went up from the soldiers guarding the family. Time slowed as all eyes turned to look on the shadow-breather standing with bare arms and uncovered head, as open a target as any of them could wish.
“Time to leave,” said Welsan, and grabbed the girl’s blackened left hand. Then he slipped his free hand into the folds of his coat.