Three days remain till I see my journalist friend about my manuscript. Thirteen days remain until the manuscript blitzing of NaNoWriMo begins, and I get to plunge headlong into the sequel. And in the meantime, there are the wonderful NaNos themselves, creeping out of their litearature-infused dens to network with the extended Brotherhood of Writers. This means that the NaNo forums are lighting up with activity (expect the avalanche to grow as November 1st approaches), and the NaNoBloggers are going into overtime. 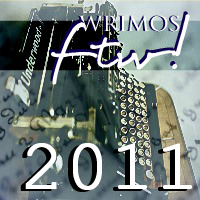 Not all of the NaNos are only just now coming out of hibernation, however. A few diligent souls have been hard at work, most notably Lyn Midnight's blog of WriMosFTW! This blog is an excellent source of networking and encouragement as you gear up for November, with guest blogs from various WriMos throughout the month. While the official NaNoWriMo site puts out all kinds of pep talks from published authors, the blog posts on Lyn's site are from fellow NaNos who have a common heritage of battle-scars from previous November blitzes, and infuse their posts with all sorts of wisdom and encouragement such as only a fellow NaNo can bring - and who doesn't want to be encouraged like that, from those who are part of the NaNo Brother hood?

The blog updates every day (or nearly), and with a variety of topics that keep apace of the NaNo frenzy. Be sure to bookmark the site as November draws near....you never know what glints of NaNo awesomeness you might find there....perhaps even a guest post from yours truly? Quite possibly....

OK. So it's not a mere possibility. I've submitted an idea for a guest post and have been accepted. Can I tell you how excited I am about this? You have no idea.