Welcome to a very big day in the life of one of my writer friends. Today, Anna Howard releases her debut novel, Flight of Blue to the reading public. A YA book about magic, friendship, and what it means to do what is right over what is easy - Flight of Blue tackles hard issues in a fairy-tale-with-a-twist approach.

Haven't heard of Flight of Blue? Here is a snippet to whet your appetite:

A cursed traffic light. A rip in the fabric of the world. A possum sorcerer injured on a quest for revenge.

Kai and Ellie embark on a journey to return the sorcerer to his home. Entangled in events that could destroy the world, Kai must choose whether to accept the role he was born to play, but isn’t sure he wants.

Writing a novel is always an intense act of love - and very hard work. So of course I wanted to know more about how Anna got to this point. Lucky for me, she was willing to sit down for an interview and give me the inside scoop on how her dream became a reality. 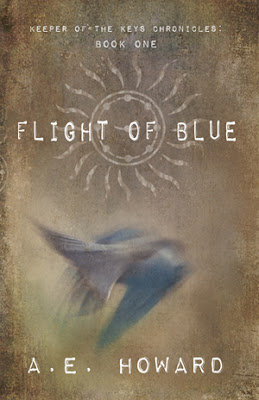 Hello, Anna! Thank you for taking time to answer my questions. First and foremost, how did you get the idea for Flight of Blue?

After nearly being t-boned in an intersection when someone ran the new traffic light by my house, I was driving home with adrenaline pumping in my veins and saw a possum lying by the side of the road. I stopped to see if I could help, and the possum told me a story about a sorcerer and the curse on the light. That's my story and I'm sticking to it ;-)

One of the more powerful sorcerers in the books is a talking Opossum. It's such a great twist to the story, but I do have to ask: Why Opossums? What made you pick that creature and not racoons or foxes or something more "traditionally" fairy tale-ish?

Well, Angela, that's a good question. I'm glad you enjoyed the twist, but I have to confess, I didn't plan it. Possums are unfortunately the most common victims of careless driving in the semi-rural area of Tennessee where I live. So my sorcerer was always an opossum. Once I met Reginald and then met his folk, I realized what a fun group they were and how much material they gave me to work with. Plus, Reginald's fun to tease. I call him a rodent and Kai calls him Reggie, and I'm not sure which of us is higher on his black list, but he's so cute when he gets all bristly. I suppose it could get us cursed or something, but Reginald's sort of sworn off cursing things in revenge after the fiasco with the traffic light. At least, I sure hope he has...

I know from my own writing experience that certain aspects of novel-writing are more difficult than others-sometimes it's an unsavory character who is hard to write, sometimes its a specific scene. What was the biggest challenge about writing Flight of Blue?

I'd say the biggest challenge was actually Sebastian. But of, course, it wasn't his fault. It was just difficult to remember to record his reactions to events since he wasn't taking part in the conversations. I finally figured out I'd been neglecting him when he kept up a constant stream of head bumps and wiggles, drawing more and more attention to himself until I had appropriately recorded all of his contributions to the events.

While Flight of Blue has a happy ending, it does end with a few unanswered questions, and hints of events to come. What can we expect for our heroes in the next book?

After discovering where his parents are, Kai will embark on quest with his friends to free them. The Realm of Darkness is even more intent on taking control of the Middle Realm, now that they've realized the Keeper walks the Realms once more. Kai will have to battle enemies on all sides with the help of his friends from Flight of Blue and some new ones along the way as he strives to retain control of his own mind and solve a puzzle that will give him a powerful means of rescuing his parents while discovering more about the mysterious prophecy of the Lucinarium.

When can readers expect the second episode in the Keeper of the Keys Chronicles?

The release date is still to-be-determined, but definitely by Summer 2013, and hopefully a bit sooner if my team and I can swing it. The sequel is called the Guardians, and folks who are interested can like my Facebook page and/or sign up for my mailing list to get updates as planning progress. I can say that I'm about halfway through the first draft, so it is definitely underway! 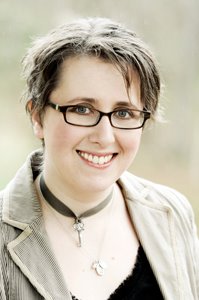 Thanks, Anna, for a great interview!

Curious? You can check out Flight of Blue using the links provided above,
or check it out on Goodreads!
a Rafflecopter giveaway
Posted by Angela at 12:00 AM