Evolution of a (Shakespearean) Jackass


I mentioned in an earlier post that my school is putting on a spring production of A Midsummer Night's Dream, by ye olde bard Willie Shakespeare. I am in charge of the set/prop construction class, and our biggest project this semester has been, without question, the donkey's head/mask needed for Nick Bottom's transformation. 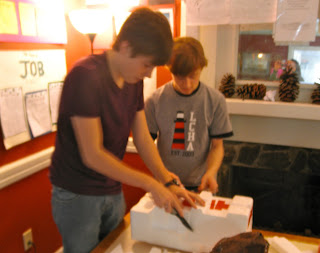 Prepping the styrofoam "helmet"for the donkey's skull.
This was fitted specifically to the actor's head.

We are a small academy, so the set/prop class is only a half dozen students, two of which have taken on Bottom's transformation as their own personal project. Since we have an incredibly small budget - and most of that going to costumes - we made a point of "upcycling" as many raw materials as possible for everything we do. 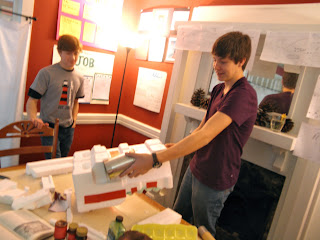 Trying the eyes on for size.

So far, we've spent almost nothing on Bottom's head, except for some Elmer's glue for the adhesive mixture, and a roll of screen mesh from Home Depot. The mesh allowed us to better refashion the packing styrofoam from a refrigerator box into something more reminiscent of a donkey's muzzle. The duct tape was instrumental for holding the mesh in place so we could apply the paper mache in as natural a donkey-ish approximation as possible. 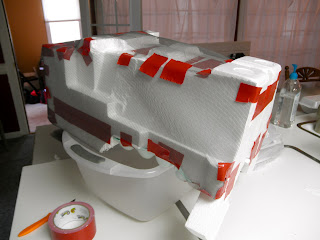 Egg cartons and odd corners of hard, squared styrofoam were used to create the molars and big buck teeth (nicely askew, since Bottom is a jackass, even before he is transformed). In the above photo, you can see the crooked buck tooth dangling from the bottom right corner of the skull.

Bottom also needs some seriously big donkey ears. These were made separately, in jigsaw fashion so they would fit neatly against the skull before being affixed - first with duct tape, then reinforced with paper mache. 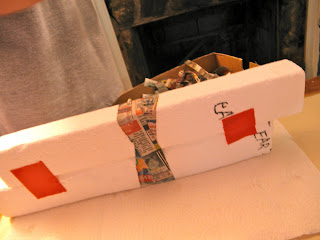 Bottom's ears don't look very ear-ish at this stage, but that was soon remedied.

Bottom's head isn't the only prop needing some serious glue-and-paper treatment, as several of my other students have been making paper mache toadstools as part of our fairy forest decoration. But the jackass takes a good deal more planning, a solid know-how of geometry, and persistence (not to mention a light touch and a willingness to get very messy). 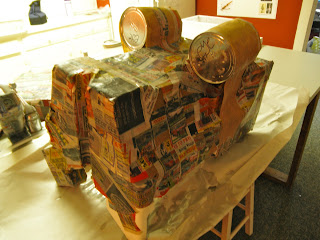 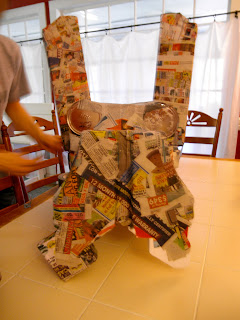 Attaching the ears. Get a load of those buck teeth...!

Our set/prop class doesn't meet every day, and paper mache must dry completely between layers, so it has taken us a couple weeks even to get this far - and it will take us a few weeks more before it is complete. But we were finally able to attach the ears and do a refitting with the actor playing Bottom. 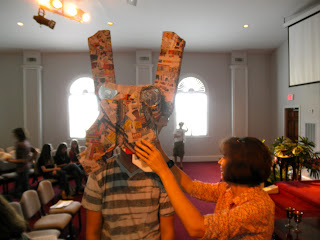 You can't tell from the photo, but the mask enables full sightline from beneath the nose, and between his oversized teeth.

This turned out to be a very good idea,  since the additional paper, glue, tin cans (for the eyes) and styrofoam had added significant weight to the mask. It also shifted most of that weight to the rear of the mask. Our next step, then, is to offset the discrepancy with some carefully modified counterbalances inside the nose, as well as some foam padding in the dome of the skull so it better fits the actor's head (fortunately, we left room for both those adjustments).

So now you've seen what I've been up to lately....or rather, what I've been instigating lately, as my students have done all the hard work. Nor is this the limit of the creative mayhem we've been plotting. More updates forthcoming - especially as the mask nears completion!

I should also do a post about how the mushrooms are coming along...they have been so quirky to make, but o so much fun!

And I haven't even mentioned Oberon's crown...but that is a whole other post unto itself.

Did I mention that I love teaching?

Seriously. I wouldn't want to be anywhere else.


Questions? Comments? Snide remarks? Let me know in the comments below!