(Do You Have a) Life Novel? 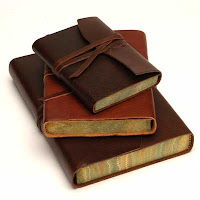 I've been very busy lately. VERY busy. What with traveling, teaching, and other work obligations, I've hardly had time to turn around and look at my shadow. Pile on that the added complication that several family members have been racking up frequent flier miles (so to speak) at various hospitals lately, making the past six weeks especially rocky.  Funnily enough, it's at times like this that I feel the strongest urge to write.

Writing is a long-standing habit for me. I started my first journal in second grade* entirely on a whim - I'm not even sure where I got the idea to do such a thing (maybe from my teacher?) - but it certainly marks a major turning point for me. Looking back, I'm inclined to think of that moment as when I truly became a Writer.

I haven't journaled faithfully over the years, though during certain seasons of life I have journaled religiously, and in large quantities. What's interesting to see is the steady trajectory of my life that has been mapped out over the years, in the hodge-podge of notebooks, fancy journals and oddments of typed paper stuck together in old report folders.

This past weekend I was home all day on Saturday, with the hours to call entirely my own. It was such a luxury, I wanted to spend it well. Some of that time I spent rereading old journal entries.

Talk about being transported to another place entirely! If I am never published for the public to read, at least I have the novel of my life written - or it will be, by my journey's end.

Here is a short sample of some of those entries:


December 27, 1983: Today was icy cold. There were even icicles on the volkswagon. Thursday is to be even COLDER. Maybe even SNOW!(**)

October 16, 1989: Mondays are always kind of looney, but this one was really strange. I don't really know why. Maybe it was because everyone was in a good mood today. That almost NEVER happens. Anyway, I had a pretty good day, except for lunch. _____________ wasn't at school today, so Annual Staff was sort of depressing. We seem to get this kick out of harassing each other.

September 3, 1994:  Today we went traipsing about in Papa's gardens, picking whatever was ripe. Tomatoes, eggplants, bell peppers - we wrenched them off their dewy bushes by the handfuls. We inspected the fig tree, but Papa said those fig-buds wouldn't be ripe for another three weeks. We then loaded ourselves down with baskets and grocery bags, and went to the back yard to pick pears. The tree was so heavy-laden with fruit that two large branches had broken from the weight.

February 17, 2011: Today went by the used book house...and purchased six books. One is a beautifully illustrated 1946 version of The Rubaiyat of Omar Khayyam. The other is a 1980 compilation of the correspondence of F Scott Fitzgerald. Apart from my propensity to gravitate toward obscure books (the Correspondence, not the Rubaiyat), the Fitzgerald purchase was a real guilty pleasure...I've decided that between [reading] Mornings on Horseback, Mary Chestnut's Civil War Diary, and now Fitzgerald's Correspondence book, that I am being fairly chased back into journaling again. And it's about time.

(*) The big topic of importance that started my very first journal entry? I had a glass of Five Alive with my afternoon snack. Big news, folks!!
(**) Big news for central Alabama, folks. Trust me.

NOTE: I didn't go a whole fifteen years without journaling...but even so I can see a distinct and sheer drop in my journaling once I had steady and increasing access to the internet....

Knowing how journaling has defined me over the years really makes this one of my snarky little soapboxes. Obviously I love the internet --- I wouldn't have a blog if I didn't --- but I've got to keep my boundaries clear and well-defined.

I can't give up my old-school journaling. I can't be unfaithful to my original Self.


Do you journal, even sometimes? Is it s safety valve, a creative outlet,
or a natural extension of your love of writing?

How do you journal - with pen and paper, into a computer file,
scrapbooking, or something else? Let me know in the comments!