Here is another episode in Welsan's Story, courtesy of another Write For Ten prompt.
Today's prompt is the word: turn.

I chose to use the word "turn" in the sense of (a) turning glass bottles and (b) turning an item to observe its many angles. Thanks, Donna, for another great writing prompt!

This episode follows on (more or less) from episode 12. 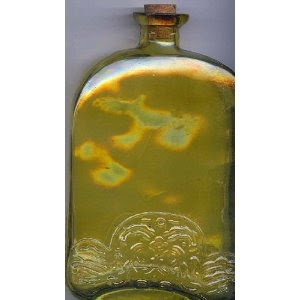 
The Vassal of Ochre has obviously spent a lot of time laying down his plans...

Two fists dropped into the midst of their conversation, cuffed with heavy leather bands etched with a curiously intricate pattern. Each held a foaming tankard of Black Taggart.
Jada looked up to see a young man about Welsan’s age, with long dirt-brown hair that spilled across his face as he shoved the tankards across the table - one to her and one to Welsan. He wore a heavy leather apron that shielded him from his collarbone to his knees. The linen shirt and breeches beneath were soaked in sweat.
“You didn’t have to come at once."  Welsan drew his mug closer as the young man slid onto the bench next to him.
“Of course I did!” The newcomer gave Jada a quick wink and made a swift, unabashed appraisal of her figure. “Berg kept babbling about pewter contracts and black coats; and no one drinks Black Taggart any more. I figured it had to be you. No one else would show up with a shadow-breather in tow.”
Jada started, and looked down to see that her arms and hands were as bare as when she and Welsan had fled the church - only since their encounter in the graveyard they were much blacker, not scribbled in decay-burns only. Each arm was as black as soot to well above her elbows.
I’ve run all this way with my arms exposed. The thought made her heart shrink. What is wrong with me? I know better than that.
By the look on Welsan’s face, he too was trying to formulate a solid answer that would both explain and shield them from further questions; but before he could the man – Jada guessed by now that this was the elusive Gallows – pulled a dark, shining thing from his pocket and laid it on the table.
“Besides,” he said, “I wanted to show you this. We’ve been turning out a record number of soul-flasks lately for a customer in the Ochre province, and I thought you might like to know.”
“Ochre?” The word spilled from Jada’s mouth and Welsan’s in unison; Jada’s hands shook so that she nearly spilled her Black Taggart.
Gallows held the bottle up to the torch light and rotated it slowly, allowing the light to flicker through it – a deep burnt orange color, with a cap and neck bracings in plain but beautifully wrought silver.
“You’ve heard, eh?” said Gallows.
“Not about the soul-flasks.” Welsan’s eyes were fixed on the bottle, with a look Jada could only interpret as a cold anger. “I’ve heard other rumors, but not this. How many did he order?”
“I need to show you,” said Gallows as all traces of good humor left his face. “You’d never believe me if I merely told you the number.”