NOTE: The usual weekend silly link will go up on Sunday, February 19th.

For now, I must post an entry for Anna Meade's beautimous blog contest. Check out the details at her blog, Yearning for Wonderland. (Short version of the details shown below, along with a glowing roster of participants.) Don't forget to read the other magnificent entries! 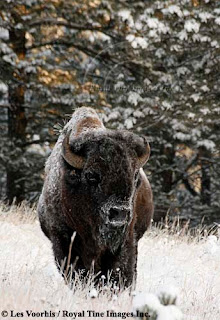 Considering the conditions, it is not surprising I crashed. A twilight patrol through the farthest reserves of Yellowstone in winter is asking for trouble and, ranger or not, I should never have gone alone.

All I remember is the frozen floor of the valley rising to meet me at an alarming angle, and at a speed that suggests I crashed the snowmobile spectacularly - a death-inducing maneuver from which I should never have awakened as I did: sprawled upon the ice, shivering and blinking at the stars above me.

I shivered again, and sat up. In the near distance, a herd of bison watched from an exposed hillock, near a wind-blown tribe of arthritic conifers. I thought I remembered seeing them just before my world-tilting crash - just as they were now: waiting, silent, alert.

Has no time passed? I wondered. I shifted on the ice, tried to ignore my chattering teeth - and nearly swallowed them in the next moment.

A body lay on the ice beside me, pinned by the upturned snowmobile.  Even before I stared into the ice-purpled face, I knew who it was.

I can't be dead. I'm freezing cold, I told myself.

My death-self was blue and stiff. I shivered again. Ghost or not, I was cold - and naked, I realized with bleak humor. Worse and worse.

A dark shadow moved near me, and I jumped. One of the bison had moved away from its herd and stood before me, gilded in frost, questioning me with its fathomless eyes. Then it lowered its great horned head and spoke.

"Welcome, She-Between-Rivers," he said. "We have waited long for you."

The bison stamped a heavy fore-hoof. "You are She-Between-Rivers," he repeated. "We know who you are. Do you?"