For the full details, you need to go visit Laura James' blog here, as she (@LEJamez) and Miranda Kate (@PurpleQueenNL) are the masterminds behind this wonderful endeavor. There are no prizes, but we ARE putting together an e-book of stories from all her writing pals, to be presented to the happy couple when they marry next month.

I intend to post my entry for Anna and Michael's book soon; but my friend Brandie - who, alas, does not have a blog of her own (yet) - finished hers first, so I am posting it here so she can get in on the fun with her wonderfully atmospheric zombie wedding story. 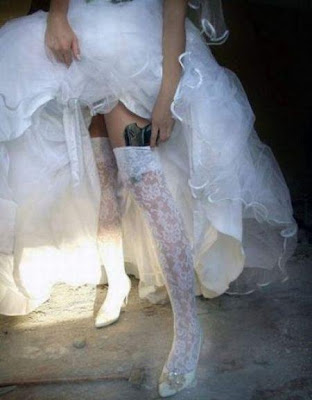 "Rebirth in the face of the undead"
Brandie McAdams
Yes to e-book
Morning sunlight peeked in through the old farm window, bathing Ada in warmth. Dust mites circled around the simply furnished room. A queen bed with an old wedding patterned quilt was a burst of color against the stark but welcoming white walls. The wood floors were lighted by the sun and echoed with stories of days gone by. Ada walked to the old vanity that held a wash pitcher and basin. Carefully she washed away the morning grime as an elderly woman, silently opened the door and walked in. Lily, she thought, and the calmness that followed the woman wrapped around Ada like a warm embrace.

Ada reached up and removed a long white gown from the hanger. She carefully stepped into the last remnants of what used to be and felt the fabric gently caress her body as Lily’s softened hands guided it up. Ada held the gown in place as Lily, who had become a mother to her, started buttoning up the back. Lily paused under giving her arthritic hands a break from the tedious task. Ada smiled knowingly at Lily and she sat carefully down on the antique wooden stool.

Lily removed the old wash pitcher and basin allowing Ada to see the mirror. They did not have much by means of vanity, but they were certainly going to make an effort.  Slowly, the knarled and wrinkled hands began to maneuver the remaining buttons closed.

Ada began to remove the rag curls she had slept in and a cascade of copper colored hair glistened in the spring sunlight. Perhaps I will be beautiful after all, she pondered.  Slowly she finger combed the curls into loose waves. Ada glanced at the freckles that spotted her nose and pinched her cheeks for color.  A golden pearl comb pulled back a small section of her bangs allowing her sharp green eyes to shine. “Something Borrowed.” Lily stated simply.

Suddenly, as if carried by the wind, an out of breath wisp of a girl burst into the quiet room spilling wildflowers out of an old wicker basket. With all the enthusiasm and pride the wispy thing could muster she produced a small nosegay of daisy’s and other wildflowers. She had tied it with a simple blue yarn, “Something Blue.”

Ada glowed with love, and was about to shower sweet Cordelia with praise for her hard work when a woman who seemed to radiate strength, power and a certain amount of danger filled the doorway. Ada was shocked, as Erin wasn’t one for weddings.

The levity that once filled the air escaped as Erin took long purposeful strides across the room. Not one to waste words, she gestured for Ada to stand and lift her gown. Curiosity or a healthy level of respect compelled Ada to obey. Erin roughly grasped Ada’s petite ankle in her scarred right hand as her left pushed the gown all the way up above her knee exposing her flawless ivory skin.  “Something new” she mumbled as she strapped a leather holster and 9mm to her thigh.

“Not quite the garter I expected when I asked you to find one for her,” chuckled Lily,” but it is definitely practical all things considered.”

Ada, whose pale skin was flushed with the amount of thigh she was now displaying, muttered a “Thanks” and got a shrug in response as Erin left as abruptly as she came.

Lily gestured for Cordelia to grab her basket and head downstairs. “Let them know we are ready.” Slowly Lily turned, smoothing her Sunday apron and tucking a strand of silver hair behind her ear. “Darling, it’s now or never dear, our window of safety will be growing short if we do not go.”

Ada nodded knowing that they had only until sunset before the nightmare that was life after zombies began, they were risking so much for her wedding day.

As the wedding party assembled, each person clung to the promise that spring had to offer.

A promise of rebirth.

Ada clung to the promise that her union would be the rebirth she so desperately needed in such a dark time. Together they could face anything, even the undead.